Impact assessment in the PEF initiative

One of the goals of the Product Environmental Footprint (PEF) Initiative is to offer a standard for impact assessment, so it is easier and more meaningful to compare products. This is the story of how the initiative chose its recommended set of methods from among the huge number of available options.

An LCA study sometimes ends up including up to 2000 elementary flows, each with its own potential environmental impacts. These potential impacts are evaluated for magnitude and significance in the life cycle impact assessment (LCIA) phase, using one of a large variety of LCIA methods. Some of them are focused on a single issue, e.g. carbon footprint, whereas some encompass multiple environmental themes. Some measure the potential impacts at the end of the environmental mechanism (endpoint level), whereas others do it at the midpoint level. Some stop at the level of characterization and others choose to include the optional steps of normalization and weighting.

Providing a recommendation for a single EF impact assessment method requires scientific research and extensive expert debates on each of the four steps of LCIA: classification, characterization, normalization, weighting.

The first two steps of LCIA are classification and characterization. In 2011, as part of the ILCD Handbook, the European Commission published Recommendations for Life Cycle Impact Assessment in the European Context. The document reports how existing impact assessment models were evaluated at midpoint and endpoint levels per impact category according to a set of criteria, including scientific qualities, applicability to LCI datasets, and stakeholder acceptance. The report’s recommended methods to use in the European context were adopted as baseline EF impact assessment methods for the PEF and organization environmental footprint (OEF). To reflect recent developments of impact assessment, the methods for a few impact categories were modified.

The chosen approach is a midpoint-level method, with a list of characterization factors that can be found here (version 2.0). For the EF Rules pilot phase, the baseline method is used with 16 impact categories. The table below shows the impact categories, the scientific studies used to determine them, and the units in which the impacts are expressed. 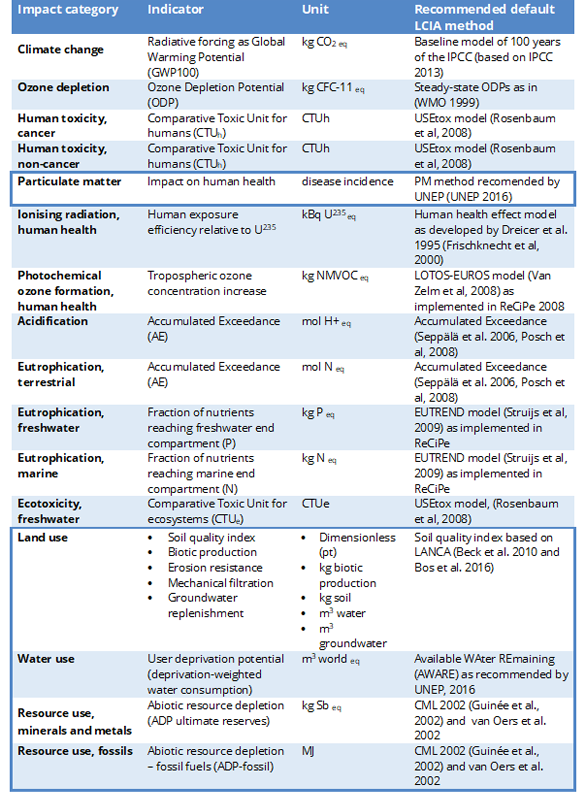 List of recommended models at midpoint, together with their indicator, unit and source. Highlighted rows: the differences compared to the PEF guide (2013).

The EF pilot phase will use the European normalization factors listed here as the baseline, based on a 2014 technical report by the Joint Research Centre of the European Commission. The report describes the territorial production-based inventory for the European Union. PRé was involved in developing the accompanying database.

Strengths and limitations of the recommendations

Among the strengths of the recommendations, the following two can be named:

On the other hand, the selection procedure also has some limitations:

The field of life cycle impact assessment is evolving very rapidly. Many new characterization models have been developed since the recommendations were made in 2011. The EF pilots are aware of this: while the choices outlined in this article were an excellent first step in the direction of accuracy and standardization, the pilots aren’t standing still. Many are currently using alternative methods for sensitivity analysis.

The Commission is also aware of the progress being made. The European Commission’s Joint Research Centre is working on an update of LCIA methods on toxicity.

If you want to learn more about our role in the PEF initiative, please contact us. See other episodes of this series:

The time of the industrial revolution is over. Now it is time for the green revolution to go full steam ahead! Everybody needs to be involved in this process, therefore I aim to guide individuals and businesses in understanding the trade-offs between impacts. This will help them make informed decisions, which will truly help sustainable living thrive."

Agri-food: how LCA may play a role in the future food system