Company-level AESAs: putting your organizational footprint in the right context

Absolute environmental sustainability assessments (AESAs) offer a promising way to determine whether humankind can stay within the planet’s carrying capacity—and if so, how. Up to now, case studies have focused on the impact countries and industry sectors have, and little attention has been paid to assessing how companies perform. With that in mind, PRé’s Analyst Hendrik Oosterhoff collaborated with a team at the Technical University of Denmark and a manufacturer of construction materials to develop a solution. And the results look promising.

Determining the Earth’s stability and resilience: why we should stick to the budget

We all know it: the impacts of human activities are environmentally unsustainable: they exceed the Earth’s carrying capacity. The planet can no longer serve as a sink and buffer for our emissions. And the potential consequences are clear: we are slowly replacing a stable environment, which defined our current geological era, with an unstable one that is, more importantly, also unpredictable: the Anthropocene. But how can we determine how much of which kinds of activity the planet can bear?

The Earth’s carrying capacity can be described in terms of the planetary-boundary framework, which identifies nine planetary boundaries, each of which plays a crucial role in determining the stability and resilience of the planet. The extent to which these boundaries are surpassed will determine how fast the shift to the Anthropocene takes place and the extent of the risks to environmental stability. What is crucial here is that the total human environmental impact should stay within the planetary boundaries.

Significantly, however, four of the nine boundaries have already been surpassed: those related to climate change, biochemical flows, land-system change, and biosphere integrity. 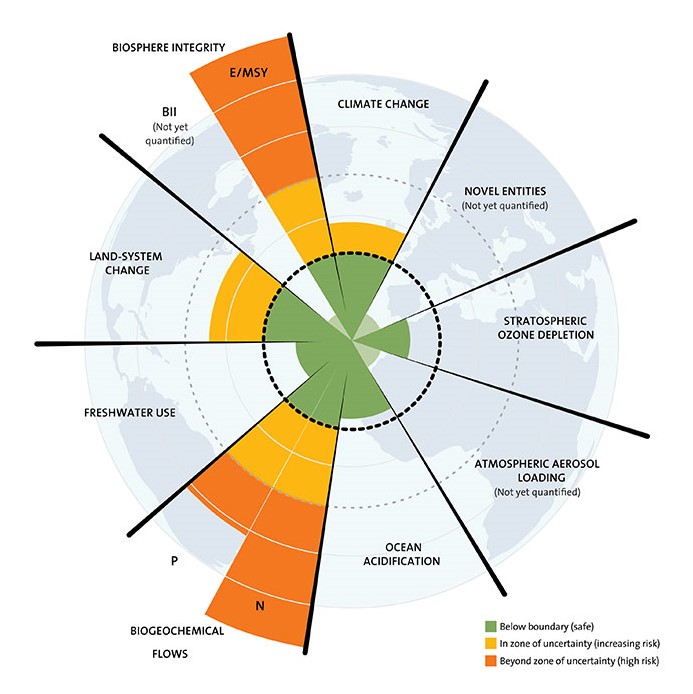 How can we assess if we stick to the budget?

Despite increasing interest in the absolute limits to our planet’s capacity, life cycle assessment (LCA) has thus far failed to incorporate absolute planetary limits into its assessments, and thus to effectively determine whether our efforts are enough to stay within the planet’s carrying capacity.

Absolute environmental sustainability assessments (AESAs) are a novel methodology that promises to make such determinations possible. Based on traditional LCAs, they nevertheless differ from it in two ways. First, final environmental impacts are expressed as a share of the planetary budget that is occupied. The planetary budget is defined by the planetary boundaries. Second, assessments are extended by means of an evaluation of the assigned share of the planetary budget. This assigned share is the portion of the budget that could reasonably be assigned to the object of study, be it a product, a company, or a sector. Ultimately, the two shares, the occupied and the assigned, are compared. The final comparison determines whether the share that is occupied is larger than that which has been assigned—that is, whether it is unsustainable or sustainable in an absolute sense, and whether the object under study is contributing to the exceedance of the planetary limits.

The biggest challenge during absolute environmental sustainability assessment is determining the assigned share. That share is subjective and normative, and should be carried out prudently. Theories of distributive justice can offer guidance when it comes to translating the boundaries from the planetary to lower-level scales, and can help us to define principles for how to assign shares of the planetary budget. There are plenty of possible principles, but the egalitarian, utilitarian, and status-quo principles are the most common.

Under the egalitarian principle as defined for present purposes, every individual is assigned —as a theoretical or notional matter, of course—an equal share of the environmental budget. Under the utilitarian principle, the share to be assigned is proportional to the value an individual or company represents or delivers, regardless of how value is defined. And under the status-quo principle, the future assigning of shares should be based on how the planetary budget is currently assigned. These principles are often applied in a certain sequence. For example, the planetary boundaries are first translated to the individual level through the use of the egalitarian principle: an equal share for everyone. The utilitarian principle is then applied in order to go from the individual to the sector level: the more money people spend on a sector, the larger the share of the environmental budget it stands to be assigned.

Could this be done for a company, and how?

Despite the great added value that absolute environmental sustainability assessments can offer to companies, case studies have been focusing, not on companies, but on countries and industry sectors. The assessment of the absolutely sustainable performance of companies has received very little attention up to now. This is in part because the translation from the planetary to the company level, especially for companies selling business-to-business (B2B), is more complicated than that from the planetary to the country or sector level. Up to now, no satisfactory methodology had been developed for company-level AESAs.

To meet this need, PRé collaborated with the Quantitative Sustainability Assessment Group at the Technical University of Denmark and with a global manufacturer of construction materials to develop a solution that allows AESAs at the company level for B2B, business-to-consumer, and business-to-many firms.

The solution is a framework that includes a three-step procedure for translating the planetary budget—the safe operating space—to an assigned share of the budget for one single company, as shown in the figure below.

The key novel feature of the method is the second step, which relies on multi-region input-output tables (MRIOTs) to describe the relative importance to individuals of every sector in the global economy. In the current MRIOTs, this can be based on economic value under the utilitarian principle, or on current environmental impact under the status-quo approach. Once the share for every sector in the global economy is known, it can be downscaled to the company level. The downscaling is based on the relative contribution of the company to the whole sector—for example, based on the number of customers served, in accordance with the egalitarian principle; on the value of the company, under the utilitarian principle; or on the current environmental impact, under the status-quo principle.

Multi-region input-output tables (MRIOTs) describe all inputs needed by each sector in an economy, as well as all outputs produced by each sector, and not just for one country, but for the interactions among countries as well. MRIOTs thus give an estimate of the flow of inputs and outputs throughout all sectors in the global economy. Traditionally, these tables were developed with economic metrics: they described the inputs and outputs as monetary flows and were used for macroeconomic planning. Nowadays, MRIOTs are being extended in environmental terms, too: instead of economic metrics, environmental emissions are added to the tables.

The new framework in practice

The proposed framework was tested in a case study, using real-life data from the manufacturer of construction materials. The actual share of the planetary budget that was taken up was determined by an organizational LCA. For the assigned share, the newly developed framework was used. Both shares were then used to calculate the environmental sustainability ratio (ESR): the ratio of the size of the occupied share to that of the assigned share. A value above 1 indicates that the share that is occupied is larger than that which is assigned, and that the company is unsustainable in an absolute sense. A value below 1 means the opposite: that it is sustainable in an absolute sense. This case study covered only climate change, but the framework allows all quantified planetary boundaries (and even other descriptions of the carrying capacity of the planet) to be included. To test various methodological decisions, for example, the use of MRIOTs from different suppliers or reference years, six alternative scenarios under both the utilitarian and status-quo principles were included in a sensitivity analysis. 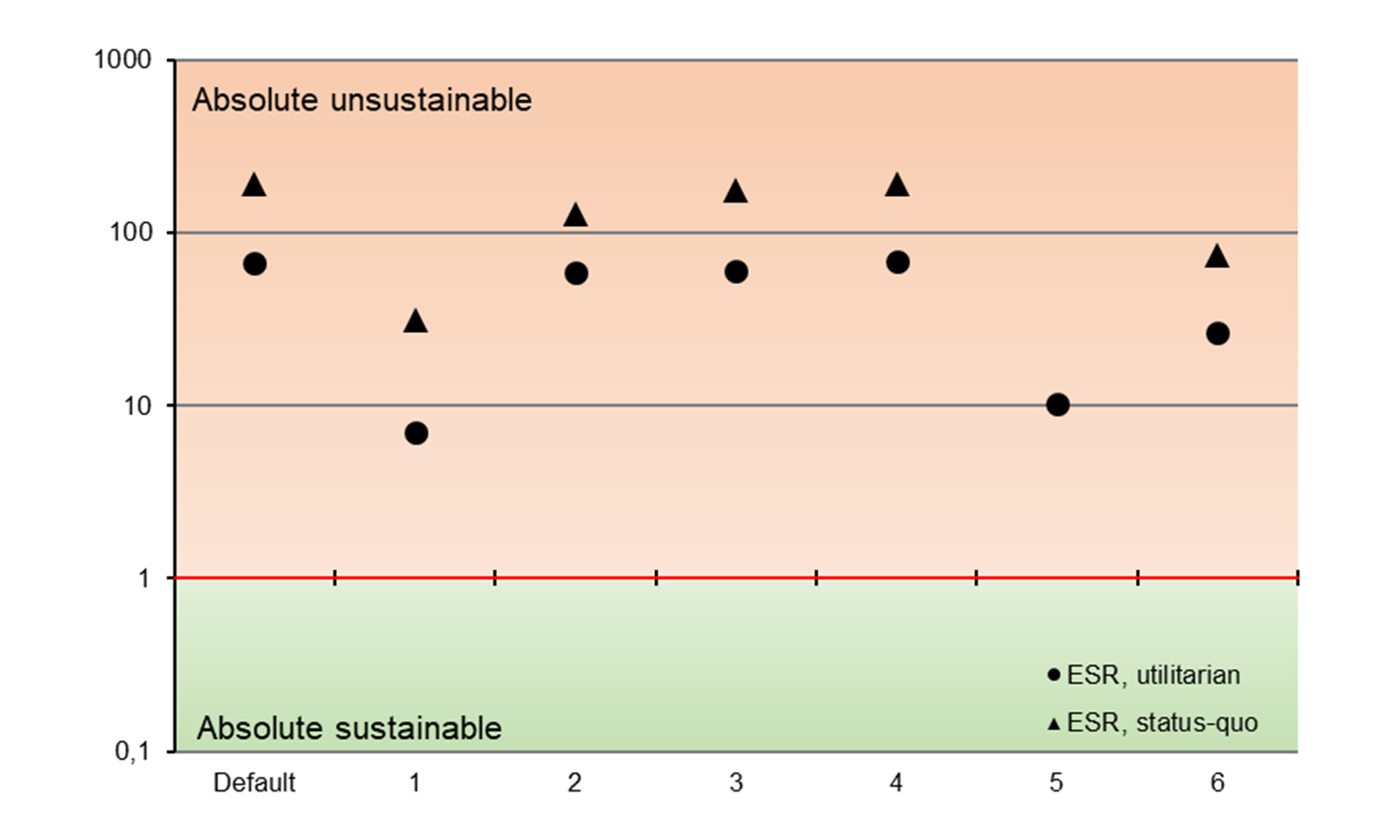 The figure above shows the results of the case study, and illustrates how reporting could be done. The environmental sustainability ratios for the various sharing principles and scenarios are reported. This way of reporting gives insights into whether the current performance of the company is absolute sustainable. In this case, the company is absolute unsustainable in all scenarios under both sharing principles. The ESRs also indicate the extent to which the assigned share has been exceeded. This gives the company tangible insights into what reduction of environmental impacts is necessary in order for its business activities to become absolutely sustainable. In this case study, reductions of up to a factor of 100 for some of the scenarios are required.

In the case study, all of the environmental sustainability ratios were well above the absolute sustainable level of 1. It is important to realize that ESRs above 1 are to be expected. As the graph of the planetary boundaries above shows, we are already operating at unsustainable levels for four planetary boundaries. In other words, our global ESR is already above 1 for each of them.

This underlines both the importance and the urgency of starting to include the carrying capacity of our planet into our current LCA practices.

Doing just enough is simply not good enough anymore. Although it requires further improvement, the proposed framework is an important first step in that direction. The case study did demonstrate that we can effectively do AESAs, also for companies.

Let’s start to include our planet. Let’s get it right by sticking to the budget with absolute environmental sustainability assessments.

The proposed framework and the case study are taken from the author’s master’s thesis, “A Framework for the Absolute Environmental Sustainability Assessment of Companies in the Business-to-Many Context.”

Blockchain and our planet: allocation of energy use

Blockchain and our planet: why such high energy use?