Dubbed “the evil twin of global warming,” ocean acidification is a growing crisis that poses a threat to both water-dwelling species and human communities that rely on the ocean for food and livelihood. Similarly, terrestrial acidification poses serious health risks for humans and plant species alike. Let’s take a deeper look at it in today’s episode of our series on demystifying obscure impacts.

Acidification, isn’t that a thing of the past?

When regions like the USA, Canada and EU saw rapid increase in emissions of acidifying substances like sulphur dioxide in the 1980s, due to industrial activity, they managed to reduce those emissions by more than 80% through legislation. However, industrializing nations like India and China have seen an increase in emissions of acidifying substances by 50% in the past decade alone. It is expected that acidification of oceans will increase by 50% compared to the current state by the end of the century – a rate unprecedented in the history.

Derived from Latin, acidification means “to make something sour.” In natural sciences, the word refers to the increase of acid content in terrestrial and aquatic ecosystems: terrestrial or oceanic acidification. Contrastingly, basification (rarely encountered in literature) means the increase in content of basic or alkaline elements like calcium or potassium in soil or water. All forms of life, both on land and in water, flourish in an environment which is neither too acidic nor too basic. Too much acidity in an ecosystem kills bacteria, algae and other micro-organisms necessary to sustain ecological balance.

Acidification processes occur naturally on land and in the ocean. However, human activities like fuel combustion have considerably accelerated the rate of acidification: oceanic acidification has increased by 30% compared to pre-industrial era and is expected to increase by 50% compared to current levels by 2100. This is  100 times faster than at any time in the past 50 million years. As shown below, the northern Atlantic and northern Pacific Oceans have witnessed an extreme increase in acidity compared to the pre-industrial era, due to high emissions from the industrialized countries in Europe and North America. 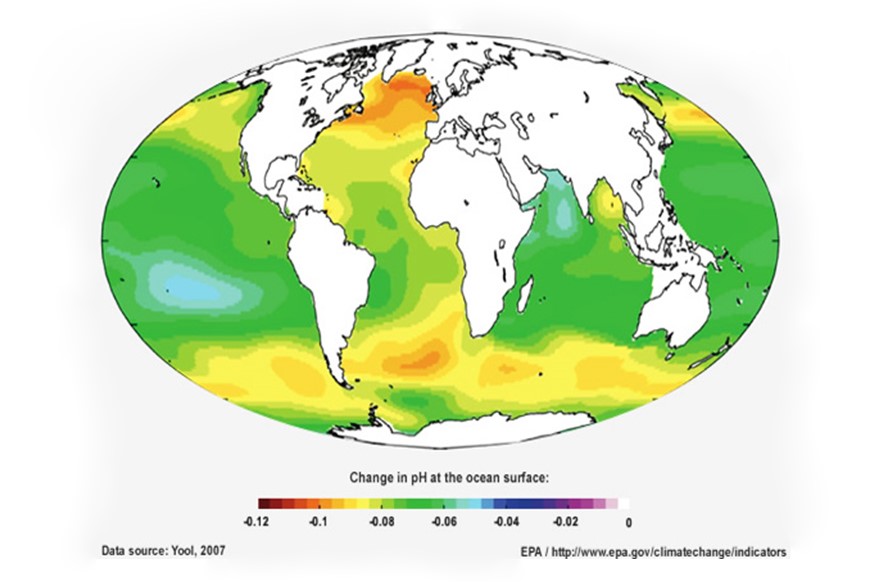 Changes in Ocean pH levels around the world from pre-industrial times to the present.

Quick guide: the acidity of a solution

Acids, when diluted in water, release hydrogen anions (H+). The higher their concentration, the higher the acidity of the solution. Acidity is measured on the pH scale, from 0 to 14 – with 0 being the most acidic and 14 being the most basic. The figure below shows the pH values of commonly occurring household substances over the entire spectrum of the pH scale. On one end of the scale, automobile battery acid and stomach acid have a pH of 1. Household bleach, in contrast, is strongly alkaline with a pH of 13. Distilled water falls in the middle, with a neutral pH of 7.

There are several important natural causes of acidification. These include volcanic eruptions that release acidic substances like sulphur dioxide into the atmosphere, sulphide emissions from freshwater wetlands or emission of dimethyl sulphide in the oceans.

However, most important contributors to acidification are anthropogenic activities, for instance, the combustion of fossil fuels in industrial activities and vehicles. These activities release sulphur dioxide and nitrous oxides into the atmosphere, which react with rainwater resulting in the formation of acid rain. Sulphur trioxide, which is formed in a reaction between oxygen and sulphur dioxide, reacts with rainwater and forms a highly corrosive sulphuric acid. Similarly, nitrogen dioxide directly reacts with rainwater to form nitric acid. These acids are deposited in the soil through rainwater and reduce the pH of soil. Most plant species function best in a mildy acidic soil environment. Sulphur and nitrogen-based fertilizers added to the soil also increase the soil acidity.

In the ocean, different pollutants are the cause of acidification. Because oceans cover 70% of the earth’s surface, they end up absorbing many pollutants. For instance, about 30% of carbon dioxide released due to anthropogenic activities like burning fossil fuels or deforestation. As the amount of carbon dioxide in the atmosphere increases, so does the amount of carbon dioxide absorbed by the oceans. The absorbed CO2 reacts with water, forming carbonic acid (H2CO3). Since carbonic acid is a weak acid, it rapidly disintegrates into hydrogen (H+) and bicarbonate (HCO3-) ions. The released hydrogen ions contribute to acidification in the ocean. Fortunately, oceans also have abundant quantities of carbonate ions in the form of limestone (calcium carbonate), which neutralize the hydrogen ions and regulate the pH of ocean water.

Why is acidification a problem?

Increased acidification both on land and in the ocean has severe impacts for humans, plants and animals. Laboratory experiments have been carried out to observe the effect of pH of rainwater on plants. The stresses associated with acidic water can reduce plant growth and disrupt plant metabolism. Since plants are one of the major providers of food for both humans as well as animals, even a small decrease in plant productivity due to acid rain could have negative economic and ecological impacts.

There is no direct health impact of acid rain on humans, but sulphur dioxide emissions can exacerbate chronic lung problems like asthma and bronchitis. Furthermore, nitrogen oxides that create acid rain also promote the formation of ozone at the ground level. While the ozone layer in the stratosphere protects us from ultraviolet radiation, ground-level ozone causes severe lung problems such as chronic pneumonia and emphysema.

Oceanic acidification poses a severe threat to the balance of the food chain. Many oceanic species such as corals and oysters use the calcium and carbonate present in seawater to form hard shells. With increased acidification, there are fewer carbonate ions available to oceanic species. At a very low pH, the shells and skeletons of these organisms can even begin to dissolve.

This was tested on pteropods or sea butterflies, a pea-sized sea-snail that forms an important part of the food chain. They are eaten by anything from krill to whales. In an experimental study, pteropod shells were placed in sea water with the pH projected for the year 2100. It was observed that their shells slowly disintegrated over a period of 45 days. Oceanic acidification also affects the behavior of non-calcifying organisms. When a body of water acidifies to a pH less than about 6.0, it begins to lose its populations of vulnerable fish species and other sensitive biota. Some fish such as clownfish have decreased ability to detect predators and locate suitable habitats in acidic waters. With these aquatic organisms at risk, the entire food chain is at risk.

The acidification impact of products can be measured by including them in LCA studies. Most of the major LCIA methods like ReCiPe 2016, ILCD and CML 2001 have an impact category for terrestrial acidification. The major emissions responsible for acidification are sulphur dioxide (SO2), nitrogen oxides (NOx) and ammonia (NH3). The acidification potentials of NOx and NH3 are characterized in terms of kg equivalent SO2, i.e. the impact 1 kg of NOx or NH3 has compared to 1 kg of SO2. The method of establishing characterization factors for NOx and NH3 is based on the molecular weight of substance and the number of hydrogen ions released upon acidification.

It is up to the LCA practitioner to choose the acidification measurement method, based on the practical relevance and the availability of data for each method. Most LCIA methods do not include oceanic acidification as an impact category.  The work of Bach (2016) on developing characterization factors that consider carbon dioxide (CO2), carbon monoxide (CO) and methane (CH4) is one of the first attempts to quantify the impact of a product in terms of oceanic acidification.

How can we reduce acidification?

Since acidification is mainly caused by anthropogenic activities, sustainable behavior on our part can directly reduce acidification. One of the main contributors to terrestrial acidification is the burning of fossil fuels in internal combustion engines for industry and transportation. While industries are slowly adopting greener fuels, car ownership rates in both major developed and developing economies are only increasing. In the Netherlands, the average distance traveled per capita increased by 12% in 2018 compared to 2002. Transportation is a huge concern. It may not be a realistic option for everyone to use public transportation or drive less. Still, people can reduce their impacts through proper vehicle maintenance: regular servicing, ensuring that tires are properly inflated and using fuel-efficient vehicles.

The best alternatives are to use public transport when possible and phase out older vehicles using combustion engines for newer electric vehicles. Several countries in the EU, such as the Netherlands, France and Spain, have ambitious policy plans to either phase out gasoline and diesel-based cars or achieve net zero emissions in the passenger mobility sector by 2050.

Soil acidification caused due to excessive use of nitrogen and sulphur-based fertilizers can be effectively reduced by the process of liming: applying lime or other acid neutralizing substances to the soil. Liming also reduces the emissions of nitrous oxide from the soil. On the other hand, it does release CO2 into the atmosphere.

The cause of oceanic acidification is clear: dissolved carbon dioxide from the burning of fossil fuels. Thus, acting on the drivers of climate change, mainly reducing the use of fossil fuels, is the most effective way to limit oceanic acidification. As responsible consumers, we can limit our impact by trying to reduce our consumption habits and opting for household electricity, household heating and mobility services that use renewable forms of energy. In many European countries like the Netherlands, utility providers generally provide an option to households to choose greener forms of electricity and heating.

We hope you enjoyed this article! Please let us know which other LCA indicators you’d like to read about and spread the word on social media using the hashtag #ObscureImpacts.

Read about other impact categories:

Ruchik worked for PRé as an Analyst in 2020-2021. He worked on pioneering biodiversity footprinting projects for a variety of clients in the financial sector. Furthermore, he applied his programming skills to automate data collection and the presentation of results. His area of expertise also includes developing online tools with PRé’s software package SimaPro.

Cooking up an LCA study