The LCA community proudly strives to cover everything in their assessments: wide system boundaries, the whole lifecycle of a product and many different environmental impact categories. That means that sustainability practitioners have to be able to talk about concepts like eutrophication, photochemical ozone formation, acidification and ecotoxicity. You probably know the meaning of the words, but do you know what it means for the planet? Why is it bad? What causes it? Should we be worried? This series will give you the information you need to work with these concepts in your sustainability efforts. Today’s topic: eutrophication.

The word eutrophication originates from the Greek eutrophos, meaning ‘well-nourished’. While this sounds good, eutrophication refers to environments, usually water, with too many minerals and nutrients. That results in the excessive growth of algae, some of which are highly toxic. In the extreme case of hypereutrophication, the growth and decomposition of algae can even deplete the oxygen in the water body, killing water plants and chasing away fish. The elements mainly responsible for eutrophication are nitrogen and phosphorous.

Unused fertilisers, sewage and detergents – all containing nitrogen or phosphorous – wash into rivers, lakes and eventually the sea. Here they fertilise the algae, causing them to bloom. These excessive amounts of algae then die, sink to the bottom, and are decomposed by bacteria.

This decomposition process removes too much oxygen from the water, killing or displacing wildlife – either directly, or indirectly when their food source has disappeared. This is what caused the ‘dead zones’ in the Gulf of Mexico, Great Lakes and the Baltic sea, which are virtually devoid of higher organisms underneath the algae-covered surface.

On land, eutrophication effects are not as extreme but still far-reaching. Traditionally, common temperate vegetation types like bogs and meadows have large biodiversity. If more nitrogen becomes available, some species start to dominate. Typically, reeds, tall grasses, brambles and nettles will displace the more diverse original vegetation. This will go hand in hand with a decrease in biodiversity along the food chain, in the insects and birds.

Eutrophication is also caused by emissions of airborne ammonia and nitrogen oxide, and will similarly affect crop lands, gardens and nature reserves. This is why, for people following the Dutch news, the recent ‘nitrogen crisis’ is such an issue.

Do we have to do anything about eutrophication?

What would the world look like if we did nothing to prevent eutrophication? How bad could it possibly get? Let’s imagine.

Most lakes, rivers and coastal areas near rivers would be opaque and coloured yellow, green, brown or even red. I envision a thick green layer of algae on top, and shores lined with clumps of dead algae. In summer, it would smell terrible.

Some types of algal blooms release toxins that accumulate in water, fish and shellfish, making the waters unsafe for swimming and the fish unfit for consumption. Water recreation and eating fish would become rare. Drinking water shortages would be expected. Ponds used for fish aquaculture would at first profit from a limited amount of eutrophication, reducing their feed costs. Eventually, though, they would similarly become unusable.

On land, the effects would be different. Because crops typically grow well when fertilised, agriculture might only notice a possible reduction in fertiliser costs or an increase in weeds. As long as the water remains usable for agriculture, that is. If meat consumption grows because fish has become too expensive, an increased demand for agricultural products would result. Most natural vegetation, however, would become areas of poor biodiversity, filled with dense reeds, tall grasses, brambles and nettles. Not the most appealing landscape for recreation or the best environment for animals and insects.

How can we stop it? Or turn back the effects?

People initially started to worry about eutrophication after the introduction of the washing machine in the 1960s. The phosphates in detergents washed into lakes, causing large-scale algal blooms and dead zones. Problems diminished when these detergents were phased out in the 1970s. Phosphates are not very water soluble, though, so excess phosphorous may remain in the river- or seabed for a long time. Adding phosphorous-absorbing minerals like aluminium salts or clay to the river bed has helped reverse eutrophication in some areas.

Nitrogen-containing compounds are the second major source of eutrophication in water bodies, and the most important source on land. These compounds come from run-off of agricultural land (fertiliser) and industrial land (mining sites), untreated sewage, fish farming, and from aerial ammonia and nitrogen oxide emissions. Increased regulation, attention to circularity and more efficient production and farming methods (resulting in the same yields with less fertiliser) have been effective in the past, and are expected to bring further decreases in the future. Other effects are also in play: changes to land vegetation (e.g. droughts from climate change) may increase run-off, while conservation efforts could lead to a reduction.

There is still reason for concern, though: The United Nations Environment Programme found half of the lakes in the northern hemisphere are eutrophic. In some lakes, eutrophication has been reversed by the systematic removal of algal blooms from the water surface. For oceans, growing and harvesting kelp (seaweed) as an agricultural product has been proposed as an economically profitable means to reverse eutrophication. 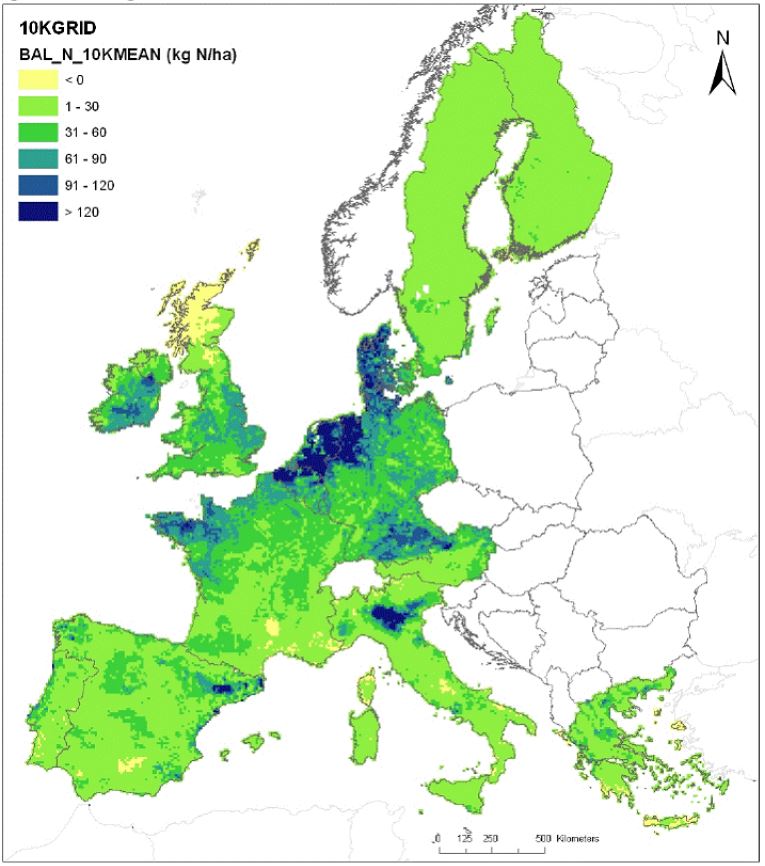 Many of the different life cycle impact analysis (LCIA) methods contain eutrophication, though approaches may vary. Sometimes, all eutrophication is present in a single impact category. Most methods, like the Environmental Footprint 3.0 method, split eutrophication into different areas of effect: freshwater, marine and sometimes terrestrial.

This diversity in methods means the choice of method is very important if your life cycle assessment study is to include eutrophication.

Large parts of the world are at risk of eutrophication. Its sources are diverse and vary locally. However, it is possible to strongly reduce their emission if a sense of urgency is sufficiently felt.

We hope you enjoyed this article! Please let us know which other LCA indicators you’d like to read about and spread the word on social media using the hashtag #ObscureImpacts. If you want to receive quarterly articles about sustainability and life cycle thinking in your inbox, subscribe to our newsletter in the form below.

Read about other impact categories:

Tjeerd worked for PRé as a Software Tester and Analyst from 2012 to 2020. He was responsible for providing consultancy services collecting data, building LCA models in SimaPro, assessing the results and preparing project deliverables as well as testing software products developed by PRé. His contributions made a difference in projects like the BioScope tool for assessing biodiversity and the carbon footprinting tool for the Dutch dairy sector.